Toward the end of last year I was aware the chapter of life I had been walking was coming to closure, it was time to die so something new could be birthed . . .

The event that triggered this realisation took place in early August, our retreat in Finland had been cancelled and we were visiting a special sister in southern Spain. My partner decided he wanted to participate at a Tantra Festival in Scandinavia and I received a very loud and abrupt, No! Not about him going, of course I respected his choice, the no was for me, and came from somewhere deep inside that knew far better than my mind.

Over the last couple years without me realising, I had gradually lost some of my razor sharp clarity. Interestingly this had not changed in regard to planetary matters or when supporting others however, in writing now, I realise that it was around personal issues that the colour, zest and clarity for life had slowly faded. Where had I strayed from my path, my centre, from the mystery and magick that I had become so accustomed to? How had I gradually started slipping back in to the numbness of existence?

So as I asked into the stillness where to for these days, I was intrigued to hear Montserrat, an island in the sea of the Catalonian Plains and home to the Black Madonna. And the very same place on our planet where Shelley Lemaire, another gifted sister, had been anchoring her work with the new incoming souls. (www.incomingsouls.com) 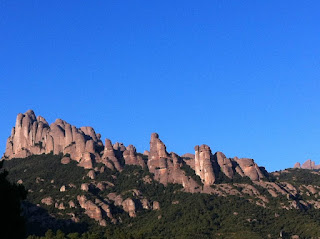 I had to laugh when I arrived at my destination and realised the cosmic joke, my partner was playing at a Tantra festival and I had a single cell in the former Monastery of Montserrat for the next few nights. Unity through diversity were the words that came to mind ;)

Waking to the sound of church bells was a far cry from the mosques I was used to after 20 yrs of living and traveling in developing countries. Now, 5 yrs out of Africa, I wondered in amazement on where this little adventure had so far taken me, the people I have met, the places I have journeyed and the extra-ordinary synchronicities that have become an integrated part of everyday life, if and when I listen ;)

My soul had been excited about this journey since we decided to take some time off on the Med and the moment I felt a full ‘yes’ to Montserrat that excitement had amplified. I was also curious why two possible traveling companions, one brother and another sister who had independently raised their hands with a yes to join me had subsequently fallen away again . . . it had been some time since I had done any solo earthwork and it made me just a little curious as to what was up in the ether?

My first stop was to pay my respects to the Black Madonna; I sat down on the pew in the front row of the church and wept for humanity until there were no tears left, one of the joys of working with the collective conscious is the reassurance that at least this one isn’t only mine. And, as the tears began to subside, a very frail elderly woman came from behind the curtain, and when almost the entire church was empty she squeezed into the front row directly beside me until our shoulders were almost touching. 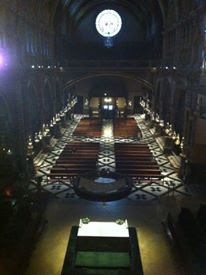 I was aware of one of the etheric teams I work with coming in and working with her for about 15 mins or so and once they were complete I started to receive a transmission, which felt very much like a transference of codes or energetic information. Maybe you have experienced something similar, perhaps without even realising what was happening. Have you ever had someone come up to you and have a conversation about nothing in particular and then after some time continuing on their way never to be seen again?

Now what was interesting is that almost as soon as the transfer was complete I had a feeling of urgency to catch the funicular to the top of the mountain. There was an natural history display at the top of the mountain which I wandered through however, what caught my attention when I stepped outside, was the sign for Santo Magdalena. I set off directly along the path and up the mountain to the saddle between two peaks overlooking the hermitage on one side and wide expanse of Catalonian on the other, not another soul in sight. 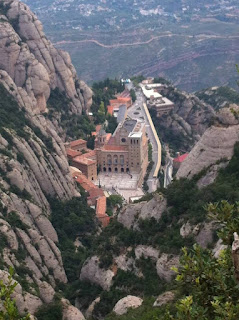 Despite the relatively fine and clear blue sky above, as soon as I arrived there was thunder and lightening and I watched as the clouds began to gather and darken, growing out of a small caldera on the valley floor. It was as though the earth was creating its own little thunderstorm from within. As I sat and witnessed the power and beauty of nature, energy began to stream through me into the earth with an intensity I hadn’t felt for a very long time. Reigniting that connection between the earth and the cosmos that reminds us of who we are.

And, as the flow of energy subsided, the rain drops began and the thunder and lightening danced right up to the cliff face to meet me, wow, such a blessing. Slowly it moved to the north side of Muntanya Montserrat and, having completed a full half circle, it came to a stop almost directly behind me. As I watched the last lightening bolts hit the earth the earth responded with 2 bright pulses of light directly each side of the second to last strike. I couldn’t believe my eyes, never have a witnessed such a response after 5 yrs of more conscious service to our dear planet earth.

My energy was so high I felt as though I had turned into lightening itself . . . work for this day was done with a very clear understanding I was to return same time, same place the following day. 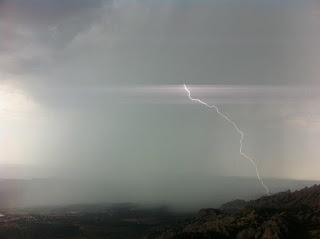 That evening I had a very leisurely and beautiful visit with the Black Madonna. My hands started vibrating when I was still 50m away and they only intensified as I came closer. When I arrived it only made sense to lay them on the ball she held and as I did even more of her immaculate energy flowed into me.

When our meeting concluded I walked through the chamber behind her statue and proceeded to receive more cosmic codes. Full of light and buzzing with energy, my heart wide open there was nothing more to do than give gratitude to my time of rest in Malaga, my second liver and gallbladder cleanse, some great myofacia and psoas release work and 10 days on a raw food diet inspired by our special sister E. I have no idea how I would have managed to conduct that lot without that extra space in my body and being!

My day was done and sleep was nowhere in sight although I must have dozed off eventually until 5.45am with the sound of the first bells, a warning for the 6am ones that seem to ring endlessly until the whole population of Barcelona must be able to hear them! 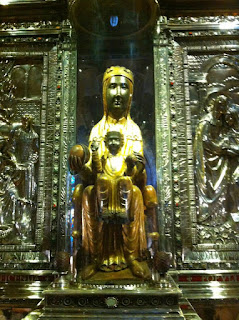 It was Saturday morning and the weekend tourists, local vendors, cyclists and climbers had started arriving. During my early morning visit to the Black Madonna another round of sobbing burst forth, the tears flowing freely down my cheeks felt like another huge cleansing for people and planet. I was wondering if they would ever end as I really did want to get up the mountain and escape the masses that were beginning to gather each on their own personal pilgrimage to Montserrat.

I was wondering if I got my instructions right yesterday for same time, same place as this time the mountain was full of climbers and there were many people in the area of my destination, trust, perhaps I needed extra support today. And right on que, the thunder and lightening began only this time it came up to the mountain face and turned south to dance with me all the way back down and around the mountain. Each lightening strike was amplified through the wire spokes of my little black umbrella, it was like receiving miniature electric shocks, never ever have I felt so electrified.
There must have been at lest 50 – 100 strikes, each one orgasmic, I laughed so hard my heart burst again and again only this time tears of joy streamed down my cheeks. So many were so close that my field literally felt I had been plugged in to the earth/cosmic mains, another planetary switchboard activated!

Never have I felt such pure ecstatic, bliss and joy for being here in a human body and so much gratitude for being here now at this incredible time of humanity’s evolution. My body’s lightening bolt of yesterday had just transmuted to a living, active volcano, firmly rooted in the earth and vertically connected to the cosmos and everything in-between . . . oh how long I had waited for this moment, I felt as though I had come home.

Knowing this connection was coming for so long, yet not knowing when, had been a constant lesson of faith, trust and patience. The physical discomfort and lack of energy during this whole stage of transfiguration from carbon to crystalline had been frustrating and yet the hope remained, I trusted enough in the experiences I had had until now to know all was perfect and also that this journey was not yet complete either. 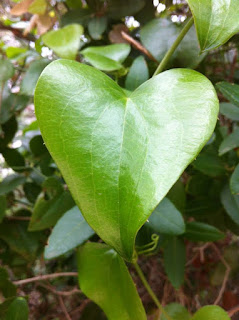 It was reassuring to know that as one chapter of life was coming to conclusion the next was already beginning. I felt so alive and soooo excited about jumping off the cliff again into the past/future/present, known and most of all, the unknown! Deep inside there was a feeling that the next chapter of my Earthwalk had just begun!

Posted by Leanne Edwards at 3:50 AM