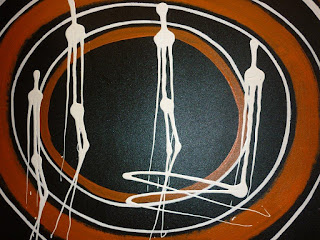 Although my first month in Carins was very much spent in isolation and hibernation the time since has been very much the opposite. Kay’s invitation to run an introductory and subsequent w/shops has not only kept me busy but also divided my time. This means that I have not yet managed to achieve all that I had set out to do however so long as I am able to get the Earthwalk Project Website up and running and learn to navigate my way between that, the Earthwalk blog and facebook I will be content to have achieved half. Once more having already written the content of my book I now realise that to edit it into shape in order to present it to a possible publisher I probably just needed to find another suitable space in which to spend another undisturbed month so that I may do so.

There is no right or wrong and definitely no regrets as there has been much learning in juggling Earthwalk with the practicalities of running workshops, keeping house and creating an income and for the first time in two years maintaining a bit of a social life. I guess I hadn’t realised quite how focused and all consuming my chosen path had become and I have enjoyed remembering how to once again let my hair down and have a party occasionally. As this began to happen I realised how important it was to connect with the very human side of myself by sharing friendship through establishing new and replenishing old relationships. If returning to that sense of community is part of our future then it is best I practice it through walking my talk.

Speaking of which I knew that my last few weeks in Cairns were going to be extra busy as not only did I have another T5T workshop scheduled but Niki Clape, an old friend from Perth who had done an overland trip with me in Africa 18 yrs ago, was coming to visit. She planned to share a few days in Cairns before taking me to Buka Island off Bougainville, PNG to visit with her second family. In addition Ian, my long term partner of the last 20 yrs, along with Rachel his new partner, were coming through Carins during their tour of Australia to introduce Rachel to the Stevo’s, and as I hadn’t seen Ian for 18 months and Rachel for about 4 yrs I was very much looking forward to catching up with both of them.

What surprised me was how many people thought it odd that I would choose to invite by last mate and his new mate to come and visit . . . especially when I felt it would be very odd not to! We shared an incredible journey together for 20 yrs of our lives, a journey that will always be part of who I am and I am pleased that Ian continues to be one of my nearest and dearest friends since our paths have parted. Once more I am very happy that he has found himself a wonderful woman who shares his passion for wildlife conservation in Zambia. They are a good looking couple and will make a great team and I hope that we remain good enough friends as I would like to share a journey into Central Africa to research one of the Earthwalk sites in the not too distant future!

Meanwhile back in Cairns my T5T w/shop was well attended with referred business from Federica along with a few new friends I had made along my way. What wasn’t part of the plan however was the accident that took place right outside the hall where I was teaching at about 8.30 that night. A car had hit something and that something happened to be someone, a +/- 20 yr old male who looked as though he was of African ethnic origins had been crossing the road on a child’s bicycle without lights or helmet when he had been hit by a passing car and catapulted across the windscreen and on to the median strip.

Fortunately Jill, one of my participants, was a registered nurse and together we were the first to respond. From what we could see we had an unconscious patient with a head injury, compound fractures and heavy bleeding. We managed to stabilise our patient as best we could until the ambulance and paramedics arrived but what surprised me was that instead of thanking us or our assistance and excusing us from the scene we along with one other from our group were recruited to help. It was an emergency situation and I can only imagine that our presence was in some way holding the space required for those that knew their stuff to do what they had to do.

It was an interesting space to be present and observe from. As I could see the scene from the perspective of the paramedics who were very much dealing with the 3D reality of a life and death situation while at the same time it was as though Jill and I were holding a space of still and calm among the chaos where we could be present for the spirit of the patient and those who were suffering from the shock of the accident. Together I felt that we made the whole by honouring and respecting both the physical and the spiritual aspects of the situation.

It also gave me reason to wonder if I needed to visit Carins Base Hospital for some reason as I now knew of two people in ICU. As a result I made a plan with Debra, who just so happens to be a mid-wife in Carins, to meet at the hospital on Monday evening which provided a perfect and effortless way to gain entry to ICU in order to visit with Cathy and her partner Kevin who had sat by her bed since her admission last Tuesday. She had been subject to three rounds of surgery to remove the dead tissue from a black head on her back that according to the doctors was the source of her blood poisoning and although still sedated was expected to be encouraged out of her coma the following day. Unfortunately our patient from the accident was not so lucky and had recently been transferred to Townsville Hospital for more specialised care.

Niki arrived next evening and by the following day was back with her T5T practice and ready to brave a mediation circle and Oneness Blessing which to my surprise she actually enjoyed. The next night we were out at the TaNKS for the opening night of the Cairns Indigenous Arts Fair (CIAF). A fantastic evening of art and culture from throughout Northern Queensland and the Torres Strait Islanders providing excellent song, music and dance and the most incredible Didgeridoo playing I have ever heard! We even managed to gain ourselves a front row perch next to the stage a few seats away from the Mayor of Queensland who had come to open the event. This prime location provided us an opportunity to chat with MC, David Hudson and meet William Burton, an Australian born and internationally renowned Didgeridoo Player. 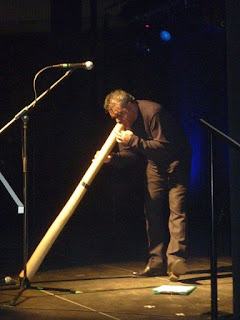 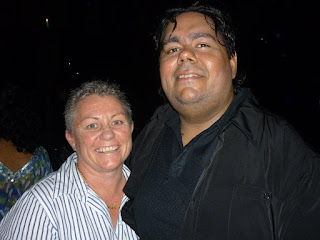 Friday night was a family affair shared with friends and neighbours, from new babies to grandmothers and with permission from Robert and Leanne’s their home provided me a space in time where my two worlds met and merged as one. We shared a seafood feast, new stories and old memories, Luke attended his first Didge lessons with Deb in the bathroom followed by a Oneness Blessing with Suzie in my bedroom. The evening just seemed to flow and I enjoyed being able to share the last hour of it talking to my old mate about his new life. 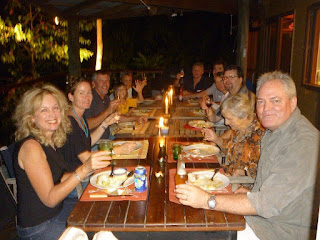 Saturday afternoon was spent looking at a possible vehicle for my Ozzie Earthwalk followed by an afternoon walk along the Esplanade with Niki and Guy. Little did we know CAIF has prepared an evening parade and in the moment Guy invited us out for an impromptu supper at his favourite Southern African Steakhouse. And our walk back to the car coincided perfectly with the evening fireworks display that we must have shared with a good percentage of Carins local and foreign population.
Posted by Leanne Edwards at 12:18 PM