Emersion in the Elements

Debra and I had planned on venturing up to the Cooktown area to visit a few more Sacred Sites of Kuku Yalangi. The elements however had other plans as the Rainforest had been living up to its reputation and after a week of torrential rain, combined with only having a 2WD vehicle, limited our access to a few of the more remote sites that were highlighted on our intended map. Coincidently and without any prior communication we were both called in the direction of the Reef and as a result when Deb phoned to invite me out for a day on the Great Barrier, one of the wonders of our world, I did not hesitate to accept! 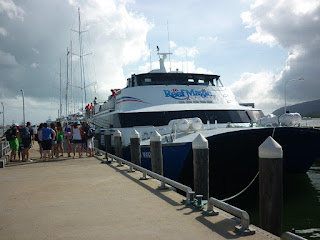 Our day began down at the pier as we boarded the Reef Magic Catamaran along with +/- 120 other local and foreign tourists and a multi-national and multi-lingual crew. Reef cruises had come a long way since my last trip out a few years back; there was a full safety briefing not too dissimilar from that of an aircraft and we had on hand dive masters, marine biologists, an attentive crew and a genuine Ozzie captain with a reasonable sense of humour. Once more, during the 90 minute journey both to and from the reef, there was a crew member on hand ready gloved and armed with ice, sick bags and compassionate smile to attend to any passengers who might find themselves in conflict with our precious element of water. 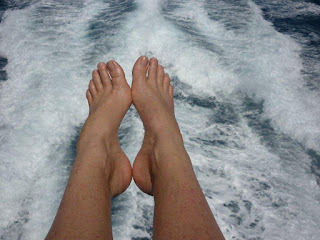 Since a couple of tourists went missing, albeit under questionable circumstances, during a trip to the reef a couple years previous all tour operators were obliged to facilitate a head count prior to departing the pier and the reef so that no one was left behind. It was during the count prior to our departure from the reef that the captain excelled himself with the comment “if you are feeling pressure on the soles of your feet it is because you are still standing on them when you should be sitting down for the count”! It reminded me of Roddy Smith’s Betty Kaunda joke form Zambia.

On Deb’s recommendation we opted out of scuba diving for the simple reason that there was little more to be seen in the depths that could not easily be viewed from the surface with mask, snorkel, a good pair of lungs and reliable set of fins. And as I recalled the same from my previous trip we chose to spend our day between the water and sundeck where form either vantage point we could easily observe the antics of “Wally” the infamous and very sociable Napoleon (Maori) Wrasse. It was the first time I had ever heard the term ‘Maori Wrasse’ even though it was quite understandable when studying the intricacy of the moko (facial tattoo) that Wally wore. 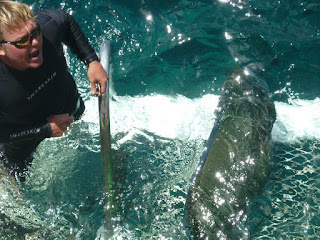 We enjoyed our time exploring the sights and sounds of one of our earth’s most colourful and beautiful eco-systems, that was until the whistle was blown and we were called back within the boundaries of the ‘snorkelling zone’. As we returned to the boat we were greeted by Wally an incredibly large, very beautiful and extremely curious Napoleon Wrasse. He actually swam up to us when we first arrived and we could see his eye carefully inspecting each one of us as we gently stroked him. Wally is a very playful character that clearly enjoys interacting with anyone who ventures into the near vicinity of his underwater world. 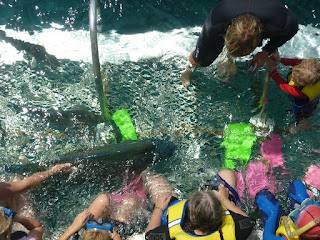 Deb also shared a very special story of the last time she came out to the reef with her friend Jo . . . They had been snorkelling for quite some time, long enough for the two of them to have ventured beyond the main snorkelling zone and for Jo to be feeling the cold. Deb took Jo by the hand and suggested they head back only the wind had come up and it was not easy to decipher the direction of the Marine World Pontoon. From out of the nowhere came one of the wrasse who circled them before proceeding to lead the way back to the boat. Once Jo’s hand was on the bottom rung of the ladder it turned to them in acknowledgement then disappeared back off into the blue from where it had come . . . what a beautiful example of how we are able to communicate with our natural world.

On our way back to the pontoon and coincidently with no prior arrangement I saw Deb conducting an underwater Oneness Blessing for the Reef at exactly the same time that I was connecting with Wake and Kinlen Wheeler’s Global Fire Vigil. For more information on Global Fire Vigil please visit; www.sacredpathways.us 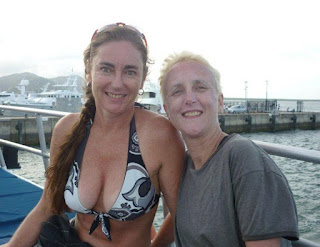 We enjoyed an afternoon snorkel tour to the outer reef and a lazy afternoon watching the world go by as we motored back to Cairns. It was an opportunity to reflect on my 3 months and 3 weeks I had been residing in Carins. I have really appreciated being still for a while and becoming part of another community. In addition to my Argentine Tango lessons twice weekly I have also enjoyed participating and assisting when asked with Deb and Amanda’s Meditation and Oneness Blessing Group and to observe it evolve and grow. Consequently I was also very aware how easy it was for me to slip into my comfort zone. I had since received a couple more invitations to house-sit and if I hadn’t been invited to fulfil the position of assistant chef on Dr Didge’s Whale Research Journey in Hervey Bay on the 2nd October I may have been tempted to stay.

I may not have got around to editing my book to present to a publisher but I know that will happen in good time and could quite easily make it my project for the festive season if I am not called or tempted to venture elsewhere on our earth. I am however very pleased that the Earthwalk Project website is finally due to due to go live and I have managed to navigate my way into the 21st century of social communications with a little help from my first project donation of an iPhone and a lot of experimentation !@#$%^! In addition through the Munay-Ki and T5T workshops I have taught has come much learning, growth and trust in my own ability to share my knowledge and experience with others in a way that can be easily understood. 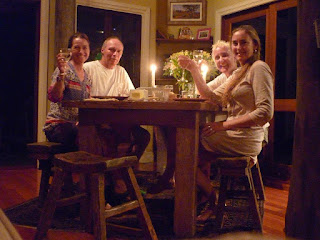 And what better way to end a wonderful day than sharing it with friends both new and old. It was a pleasure to prepare a seafood feast for Robert, Leanne and Debra to thank them for the privilege of house-sitting their special space and for simply being part of my life. And it was just as special to be woken by the Kookaburra’s at dawn the following morning to be called out onto the veranda where I observed a beautiful little spider weaving a new web. It made me realise that with the Munay-Ki gathering I had arranged for the coming evening I was busy in a similar way joining the dots with strands of light that linked like-minded people together. 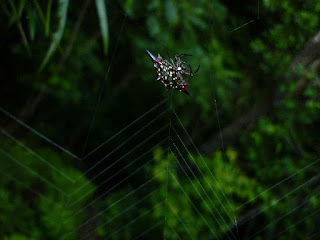 Erica, Robert and Leanne’s cleaning lady, kindly loaned me her car for my last couple weeks in Cairns which was a great help even though my hope to purchase it fell through at the last minute. Coincidently this left me too little time to look elsewhere before I had to leave for Hervey Bay, perhaps the universe has other plans and my hope to return to Sedona to attend my Tantra Teacher Training and Drunvalo’s Advanced Earth/Sky Living in the Heart Workshop in November may still be on the cards. But that too is only one of the many possibilities of what the future may hold and right now I am very much pleased to be living very much in the present moment.

After all what more could one want than a 24 hour bus journey to Harvey Bay accompanied by Shirley MacLaine’s, ‘El Camino’? This is the homework I was given from a recent healing session with Celia Fuller where I explored, excavated and repaired a little more of my ‘Atlantean Experiment’ past life debris that is causing my current physical left/right integration/alignment issues. And if that doesn’t shed a little more light on my past and thus my future than I am sure a whole week on the water with the whales in Hervey Bay will certainly bring the elements and everything else back to balance!
Posted by Leanne Edwards at 10:16 AM