House-sitting in my Hometown 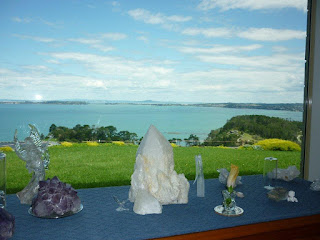 On my way north from Auckland I ended up spending an afternoon with Elandra, a wonderful woman of Danish origins who having been brought up in NZ had spent most of her life in California and Kauai (Hawaii) with Antion her husband. They have recently returned to Orewa and a life that takes them on an annual migratory route between Bali and New Zealand. Michael Fleck, a networker of note that I met at Prana, had put us in touch when I mentioned that I was looking into running a joint w/shop with Toby in Kauai later in the year. As Elandra is an author, a yoga teacher and energy medicine practitioner we had a lot in common so much so that we hardly touched on Kauai, however that alone is good enough reason to meet again.

My next port of call was Elle’s house between Orewa and Waiwera which had been described to me by Vernon and April as a round house on top of the hill between the two towns, where a lady lived that I had a lot in common with. Coincidently Elandra was also a friend of Elle so we gave her a call and invited ourselves up for afternoon tea . . . an engagement that turned into an energy healing session, supper, an introduction to the work of William Henry, an Investigative Mythologist, and an overnight stop in what Elle’s friends refer to as the Lighthouse but I felt to call the House of Light. Elle holds a very special space on the north side of NZ largest city with views for 360 degrees and line of sight with a number of extinct volcanoes. It would certainly provide front row seating if and when any of them ever decided to wake-up! 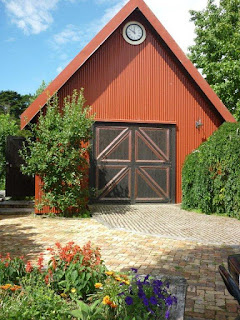 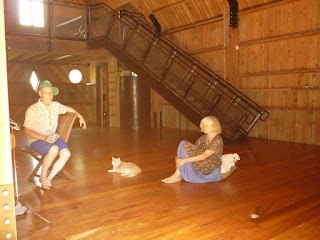 I could have stayed with Elle for days, watching videos, reading books from her extensive library and sharing stories however I still had to call in on Beatrice, a friend in Puhoi and wanted to have some time with Mum in Whangarei before making my way up to the Bay. I did have to collect some money from Beatrice for an energy session she had with me at Prana however the main reason to visit was to check out her Retreat centre, “The Barn” and her home space in Puhoi as a future workshop venue. And wow, what an amazing space that is easily accessible to Auckland yet right in the country side with an absolutely beautifully finished house and barn that is ideal for anything and everything.

It was good to have a couple of night with my Mum before heading north to my house-sitting job in my hometown and what better place to take a week out to rest and catch up with myself than the Bay of Islands in mid-summer? Thanks to my mum’s boyfriend Jim, I had a house to take care of and Blanco (white), his black cat, to take care of me . Located in the heart of Paihia I enjoyed a wonderful view across the Bay to Russell, Tapeka Point, the Treaty Grounds, Kerikeri Inlet and the Black Rocks . . . there was a sailing regatta on and the Bay was full of sails for most of the week and when it wasn’t we were hosts to three different cruise ships passing though. 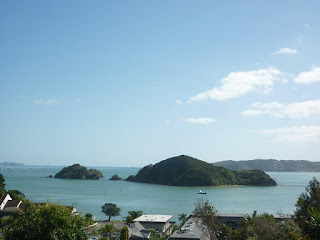 Arriving at the tail end of cyclone Wilma reminded me of my last visit to Paihia for the Treaty of Waitangi Tribunal Hearing in May last year when the sky gods certainly made their presence felt! Coincidently it was from that story that friends from Switzerland, Christine and Christian Pellegrini, supporters of SIDECOLE, a former donor of Conservation Lower Zambezi from the days of my NGO work in Zambia, were inspired to visit. Little did either of us know however that they would be visiting the Bay of Islands at exactly the same time I was, and not only that but they had chosen to stay in Opua at the B & B of my former High School Principal and his wife.

Synchronicity or coincidence, hmmm, me thinks there were just too many coincidences for our meeting to be anything but synchronicity! What amused me even more was the itinerary that Christine had created for both her and Christian during their month in NZ. They had chosen many of the areas that I had been taken to during my journeys both last summer and this summer which to me was a perfect example how even when we are not walking completely consciously of our multi-dimensional reality or the purpose of our journey we still end up being exactly where we are meant to be when we need to be there. Perhaps this emphasizes the importance of following our feelings everyday and not only when we are planning our vacations.

I enjoyed my days catching up with my blog, taking a daily swim across to Motu Maire Island and evening walks along the beach. Shopping at the farmers market on the village green was a pleasure and provided a perfect opportunity to meet a few of the many Europeans who now call Paihia home. I also enjoyed some very interesting conversations with a Jewish man who having been brought up on a Kubutz in Israel has lived in Paihia almost as long as I have been away. I was overwhelmed by his strong belief system and his concern for me that I am being led astray by the devil. Interesting that he asked me how I would feel if at the end of my life I discovered that I had been living a lie? All I could respond was that at least I would have enjoyed my journey  . . . I feel he was concerned that I wasn’t taking life seriously enough but the truth be known is that I took life far too seriously for far too long . . . it’s time to have fun! After all are we not here on earth to appreciate the simplicity of life, the beauty of living in the moment, and this physical body that enables us to explore the world through our senses! 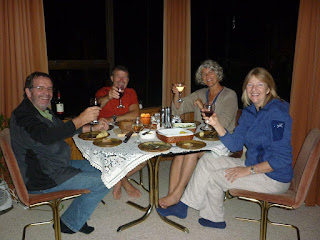 My idea of catching up on my blog didn’t manifest quite how I imagined it would due to getting busy with private clients and social engagements . . . yes, learning to live in the moment and enjoy what each day brings! Peter, Maree, Christine and Christian came for supper on Saturday night and then on Sunday after a night of torrential rain and much flooding Peter and Maree took me over to Russell to visit a few friends of theirs. Our first port of call was with a well known Kiwi artist by the name of Lawrence who had just returned from a journey to Antarctica, and his wife Gretta who had the most incredible garden I have seen all summer. They invited us to share lunch and their amazing space in Russell where Peter gave me the guided tour of the house, a tribute to a number of great New Zealand artists and their work. 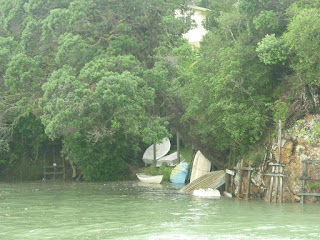 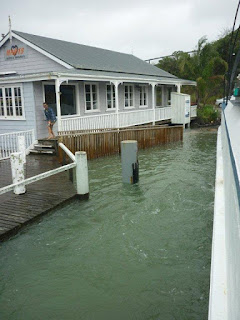 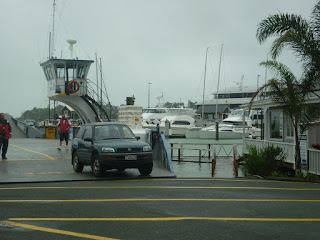 After lunch we took a walk a few doors down the road to the house and studio of Helen Pick, another inspiring artist and the mother of Rua Pick who coincidently had shared the same 6th form art class with me. The synchronicity came when on my most recent return to New Zealand Rua had found me on facebook and I had learned that he was responsible for bringing through a number of the ancient paintings that were woven through the book, Song of Waitaha. Extraordinary listening to Helen describe Rua’s journey and amazing how we were becoming reacquainted through our work with Waitaha. All in all we enjoyed a lovely afternoon together sipping bubbly and exploring Helen’s studio and garden while Peter and Helen’s husband Andrew visited the boat and talked sailing . . .

Monday morning came with an invitation to join Christine, Christian, Frank and Vanessa and a few of their friends for supper at their home in Opua. An invitation which I graciously accepted wondering what it would be like to share supper with my former Principal. In between work and play that day I couldn’t help reflecting on the most extraordinary journey my life had been in the last 25 yrs since I left high school. And observing myself at supper I began to realise just how much my world has evolved and expanded through my experiences of the last 20 yrs as a nomad. It helped me appreciate how fortunate I am for each and every experience that has shaped me into who I am and the many more that will continue to shape me into the person I am becoming!

Maree had a work supper on Tuesday night so Pete and I made a date to collect a few bins of seaweed for their garden. An exercise that took no time at all thanks to the recent storm which left us plenty of time to take walk along the beach to Waitangi. We decided to go as far as the yacht club and then on our way back were wooed on to the foredeck of the Sugarboat, formerly Kelly Tarlton’s shipwreck museum, with live music and a happy hour. Conversation ranged from Africa, art, sailing, love and life through to the journey of awakening . . . it really was lovely to share an impromptu and relaxing evening out with a good friend. Oh how I used to take those evenings out in Addis for granted . . . well not really but as we went out for supper most evenings when we were in town on business it wasn’t the novelty it now is, or maybe I am just looking at my experience through different eyes.

I enjoyed a couple quiet days before it was time to clean up and pack up for the next leg of my journey. There were a number of people travelling up from further south for the Kauri Waihotanga, Indigenous Healing Gathering in the Hokianga and I had arranged to meet everyone at Pete and Maree’s space in Waimate North for a Pot Luck dinner the night before. As usual some that were coming didn’t make it and others that weren’t showed up and as it happened everyone who was meant to be there was. 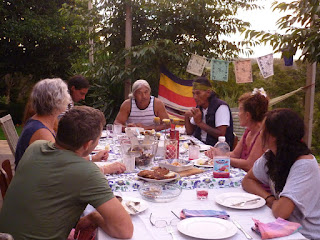 I arrived in time to help Peter and Maree do a quick tidy up and then for Maree and I to take Buddha for a walk and us for a swim down in the river, a perfect way to clear a day’s accumulation of esmog! And to our delight not only were Valesi and Minni there to meet us but just as they were leaving home Peter Harrison, a very special tohunga from Kaitaia and my favourite star teacher had arrived and they had brought him too. The funniest thing is that as I was baking a cake that morning, which I have to admit crumbled as I tipped it out of the cake tin, I had thought of Peter and his visit with me in the very same space the year before and how he had explained that ‘gravity is the glue that holds everything together’ and as I put the pieces of cake back together I couldn’t help but laugh that I had forgotten to put the gravity in! And little did I know he would be partaking in the very same cake with us that evening.

We shared a lovely supper and before we even managed dessert Peter was in the kitchen cooking up some local herbal preparation in order to dispel the mosquitoes, Lots of wonderful connections made and Maree and Peter H are already making plans for the Traditional Medicine Workshops that they are going to prepare in their magical space in Waimate North. 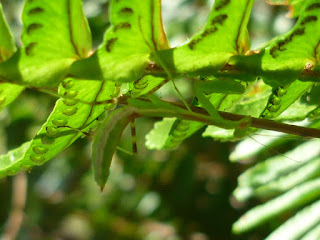 Posted by Leanne Edwards at 2:04 PM