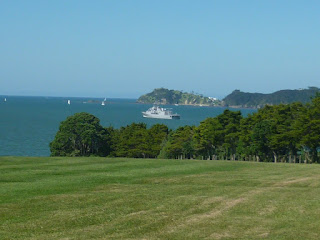 Back to the Bay of Islands for a couple of days and with summer in full swing my most pressing appointment was one with the Pacific Ocean! A swim across to Motu Maire Island was the perfect way to connect back with the east coast along with the festivities of Waitangi Day, as I dodged NZ navy boats ferrying passengers between the Paihia wharf and the frigate anchored in the harbour. Jim was home and we gave Mum a call to see if she would like to join us for the afternoon and evening but she declined saying she was too hot and really couldn’t be bothered driving up. 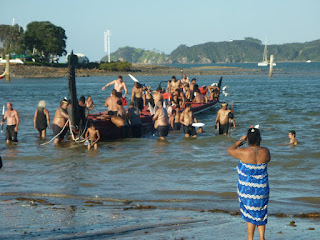 I enjoyed an afternoon walk to the treaty grounds to observe the NZ Navy ceremonial sunset and listen to Ray Wolf playing at Hobson Bay. Returning back past the yacht club I watched the men practising in their waka (Maori Canoe) in preparation for the Waka Karakia the following morning. As Jim and I were home alone I stopped back past the supermarket to purchase some fresh fish and a bottle of wine for our supper and had to laugh when I got back to his house and discovered he had done exactly the same thing. Dinner for two on the deck overlooking Paihia was an absolute delight, it was fun to share supper with my Mum’s boyfriend as he reminded me of memories he had of me as a child growing up in Paihia. 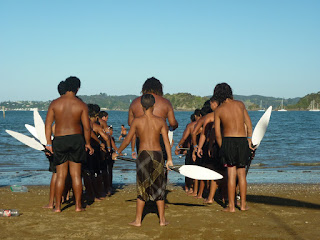 Next morning I got up a little earlier than usual to allow sufficient time for my yoga and meditation before walking down to Waitangi for the Waka Karakia. As I wandered down the hill I was delighted by another synchronistic meeting with Michael Fleck who pulled up directly in front of me with two of his friends; Yuri and Gabriela. Yuri is a NZ resident of Russian origins who had been introduced to Earthwalk via a mutual friend and Gabriela is an author and friend of Michael’s from Hawaii who travels the world making her own documentaries of the different countries, cultures and people she meets along her way. She was busy filming while she was in NZ and had plans to screen her recent documentaries of Iran and Israel, two countries I have not yet visited, in Waiheke later in the month.

It was lovely to have some like-minded friends to share the morning with and wonderful to reconnect with another soul brother from the ancient past. As a Bay of Islands resident Waitangi Day wasn’t so special for Yuri but for some reason he had felt (in his words) ‘to get his butt out of bed’ on that particular morning and join Michael. What was interesting was that within a short space of time he had concluded that the reason he had come was so that we could meet and in the spirit of the moment invited me to come to Waiheke Island and celebrate his wedding in two weeks time. Not being one to just show up at a wedding for the sake of it I asked him to give me a few days to feel out the possibility and I would let him know . . . I must have known something though as that afternoon I still went ahead and purchased a wedding gift. 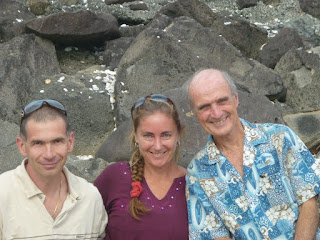 The Waka Karakia was brilliant and it was great to see such a large crowd gathered at Waitangi to enjoy the festival. Such a different scene from many I remember as a child, which although contained some very fond memories, many were overshadowed by angry crowds, protestors and riot police. Waitangi Day is now celebrated as Waitangi Festival, a celebration of Maori; art, craft and culture and, with sporting events and participatory performers, there really was something for everyone. Supported by a number of national celebrities it was interesting that Jim had been invited by the local MP to meet our NZ Prime Minister while Michael, Yuri and Gabriela ended up having supper at the table next to him in Kava Restaurant the night before. 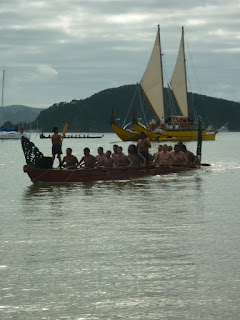 I did have to smile when the only peaceful protest was being led by Kereru Ponamu, a soul sister and fellow Grandmother of Aotearoa, who just so happened to be one of the guest speakers at a gathering in Puhoi the following weekend. Kereru’s topic of choice being ‘from Protest to Peace” 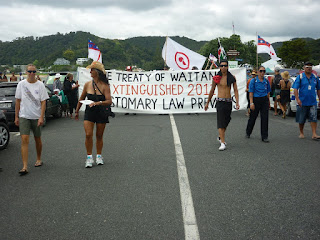 I parted company with Michael and Gabriela at the Meeting House on the Treaty grounds and made my way back down toward the Waitangi Marae where I was hoping to meet up with a few of the visiting healers I had met at Karui Waihotanga in the Hokianga. I was called to enter the grounds through the main entrance and as I walked toward the area for stalls I noticed one of the Kaumatua who had spoken to Treaty of Waitangi Tribunal hearings in May last year. He was busy in conversation however the woman seated just behind him motioned me over, we introduced ourselves and I soon discovered that Whio, the Kaumatua’s sister, was one of the most incredible woman I have so far had the pleasure of meeting.

A beautiful heart-centered woman who had spent many years supporting her brother both in NZ and overseas had recently handed that responsibility over to another member of the family so that she could stay home and focus her energies on supporting young woman in her South Auckland Community. She explained her quiet way of working, taking women into the bush and reintroducing them to the old ways to help them reconnect to their spirit and the land. Such an inspiration . . .

There was no sign of my friends from Hokianga but I did manage to catch up with Valesi and Minni as I passed through the Marae grounds for the last time until next visit. Returning to Paihia I discovered Jim cooking up a huge pot of his famous seafood chowder which both he and I were disappointed that I would not be there to share as I had already made plans to meet friends for an evening picnic on Whangaumu Beach near Tutukaka. Time to pack and head south . . . I do love my life even though the continual unpacking and repacking doesn’t always entertain my sense of humour, perhaps I have to learn to travel even lighter still! 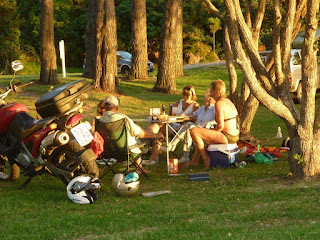 Taking the scenic route to Tutukaka provided an insight into the destruction caused by the recent cyclone. Thus dodging landslides and road cones where roads had been washed away became the order of the afternoon. I arrived at Sandy Bay in time for a lovely evening swim in the surf at the tail end of what appeared to be a National Surfing competition before moving on to Whangaumu to meet up with Chris Bone of Oceans Watch, his family and a few like-minded friends whose names I had heard over the past couple years and who I now had made acquaintance with. And what a wonderful way to end a very special week of friends and family in the Far North! 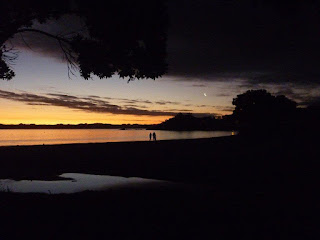 I enjoyed a few days with Mum while I sorted out what was to stay at her house, what I needed for my journey to the South Island and last couple months in NZ and what I might need for the next leg of my Earthwalk Journey, which by all accounts seemed to be heading back in the general direction of Australia, Africa and perhaps even South America before the end of 2011.
Posted by Leanne Edwards at 12:13 PM