Slipping into the Comfort Zone 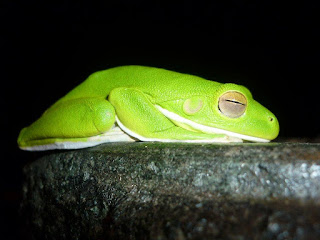 Having not really had a base for the past 2 yrs since stepping out of Africa, my conservation work and a 20 yr relationship I am very much enjoying my southern hemisphere winter retreat in the tropics. The hummingbird within is comfortable and very content perched in a pole house on edge of the rainforest where even when it rains it is warm. I can study the stars from the comfort of my bed and rolling onto my belly to greet each day I can see all the way to the sea. I have had enough work to pay my bills and made sufficient time to introduce the Earthwalk Project onto the public platform of 21st century social communications. However, as I take my first timid steps, I realise that this trainee pilot requires still some serious navigation lessons!

My Five Tibetan Exercise Rites, Core Stability and Energy Breathing workshop (www.T5T.com) went very well with a full group of eight and enough interest to organise another. I was surprised as I thought there would be more interest in the Munay-Ki, Energy and Conscious Living workshop (www.munay-ki.org) than the T5T however the ladies obviously knew what they needed more than I did and I wasn’t about to argue.

As I only have two ladies interested in the Munay-Ki I have decided to take them on a Munay-Ki Weekend Walkabout Workshop and weave the Rites and Teachings through the Sacred Sites of the Daintree Rainforest in Far North Queensland. Now as excited as I am about the prospect of this the most amusing thing has been observing the human side of myself that is getting so used to its new found comfort zone actually come up with reasons why not to do this. It does make me laugh when I have to remind myself that growth comes from stepping out of our comfort zone!

Speaking of comfort, physically I have had to source a little external assistance from Frank, who describes himself as a remedial massage therapist yet is much more, along with Nicole a Kinesiologist and Chiropractic, to help me with the stuck bits that Frank’s handiwork could not resolve. It seems as though the on-going saga of my left/right integration issue has a block I have not yet been able to shift. Perhaps it is still debris remaining from an Atlantean past life where I understand I was sliced and spliced with another creature and had a crystal implanted on the base of my skull, or maybe it is something else. Either way I am physically over it and well and truly ready to let the story go!

Emotionally it has been a time to practice patience and stillness in order to allow the Earthwalk Project to evolve in its own time rather than ‘making’ it happen in the way I have been used to managing projects in the past! I guess what it is really about is finding the balance between the two, between the left and right brain especially when my right (creative) brain, according to Nicole my Chiro, was energetically bulging gout the side of my head due to the overload from all the writing of late. She suggested taking up suduko however I opted for the house and garden duties instead.

Kevin also added a few useful wise words of wisdom during a recent skype conversation where he related my situation to that of running a marathon. He said that at the beginning the field is very full and what was suggested to him was to learn to run in the spaces as this requires little effort, eventually the field thins out and the way becomes clear. Interesting as relaying this message to you and relating it to the on a project rather than a personal level has given me an even greater insight to the wisdom within his words . . . this Earthwalk Project seems to be a journey that continues to begin again and again . . .

Gathering the information for the Earthwalk Project website has been a journey unto itself. Some months ago I realised that rather than re-invent the wheel by creating all the information myself it made far more sense to invite the ‘experts’ that I have had the privilege of meeting along my journey to share their wisdom and knowledge through the space I am holding for Earthwalk. That way by providing an article relative to their particular field of expertise for which they would receive full credit and link to their website, those that are called will be able to find them. Energetically this feels right as ideally I hope that the site will become a transit station or porthole where people can pass through and hopefully find a person or tool that will be able to assist them in their own ‘Earthwalk’.
Posted by Leanne Edwards at 1:43 PM