It was time for our Munay-Ki weekend walkabout workshop through the Daintree Rainforest . . . our original plan had been to leave Cairns on Thursday afternoon however Cathy, an important member of our team, had come down with a sudden and very acute pain in her shoulder. And, in addition to her physical discomfort Cathy’s physio had for obvious reasons also recommended against the idea of travel.

Knowing how important this journey home through Kuku Yalanji, the land of her ancestors, was to Cathy we decided to postpone for a day and see how she felt on Friday morning. I also found it interesting that this sudden onset of illness coincided with the Munay-Ki and the chosen destination for our journey and wondered how interconnected the two might be and if it might be worthwhile for Cathy to consider coming as she was and addressing the cause along the way. Friday morning arrived with a very disappointed Cathy, she was still in an incredible amount of pain and remained unable to join us. (Perhaps she also knew what was best as on return we found her in Cairns Base Hospital where she had been unconscious for four days with a diagnosis of blood poisoning.)

Nevertheless Debra and I had made a commitment and thus decided we would continue with the journey as planned and wishing Cathy a speedy recovery invited her to join us in spirit which she must have done as we felt her presence on several occasions during the course of our journey. After a morning trip to Rusty’s Market for fresh supplies, we packed Robert’s car and headed north toward Port Douglas, Mossman and the Daintree National Park, that special space where the rainforest reaches all the way to the ocean.

It was exciting to embark on a physical and spiritual journey into unknown territory, where although we had a basic structure to the content that had to be covered during our weekend w/shop there were no fixed times or places that we had to be at any certain moment. We were free to weave our program through the sacred sites and natural landscapes of the Daintree, a World Heritage Site, as and when we were called . . . and so our journey began at the Daintree river crossing where we stopped by the water to ask the spirits of the Daintree Rainforest permission to enter.

With permission granted we made sure we were very present to our surroundings as we made our way along the winding road through the rainforest which before long blessed us with my first ever sighting of a wild Cassowary. A resident of Australia the Cassowary is an extraordinary land dwelling bird and, as far as I am aware, the Daintree is known as one of the last remaining habitats that support the majority of the estimated 1500 Cassowary remaining outside of captivity. 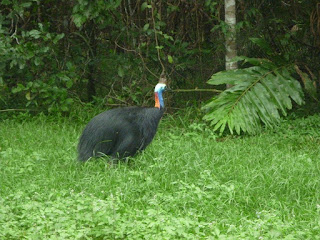 First stop was the ‘Blue Hole’ a sacred women’s site where men are requested not to enter. Perhaps if men knew that failure to respect this request may result in them becoming sterile they may tread with a little more caution. However as the Blue Hole has not yet been cordoned off as a sacred site, and the Aboriginal keepers are not permitted to post signs the local resorts continue to encourage all to visit. Much to the dismay of the Aboriginal people, both men and women seem to come and go as they please.

Once we were organised with everything we might need we stopped to ask permission to enter and perform ceremony, a common and very important courtesy I had learned over time that was becoming a vital component of the way I was learning to walk in the world. At first our reception was quite cold however as I continued to explain through my thoughts the purpose of our visit I felt a shift to curiosity that very soon turned into a warm, open and almost excited welcome.

And we certainly did feel as though we were being well taken care of. One couple were leaving just as we arrived and no one else came to visit during the entire time we were there. We offered our thanks, stripped off and submerged ourselves in the most beautiful sacred waters of the Blue Hole. It is suggested that the blue comes from the high mineral content of the waters of this little oasis in the middle of the rainforest where everything seemed to be in balance. There were birds and butterflies in abundance, a variety of fresh water fishes and the most curious terrapins I had ever encountered in the wild. After cleansing ourselves in the sweet waters, opening sacred space and asking permission from the ancestors of the land to join us I shared with Debra the four foundation rites of the Munay-Ki. 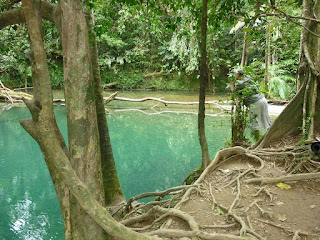 That evening we had been invited to Ron’s house on the road to Cow Bay. Ron is a regular participant in Debra’s Wednesday evening Meditation and Oneness Blessing Group who had invited us to stop by and share a night during our walkabout. He has a simple, symmetrical, self sufficient cement and brick home that he designed himself and had built in the middle of the rainforest. Our home for the night came complete with two very comfortable Zanzibar couches for which there was no better place for Deb to relax and integrate her day while Ron and I prepared our supper. We shared a special evening together exchanging stories and sharing information before I rolled out my very new second-hand swag on the walkway under the stars to be lulled to sleep by the sounds and smells of tropical north Queensland.

I was woken in the wee hours of the morning by raindrops however my cocoon was too cosy to consider budging so I just pulled the top of my swag over my head and trusted that the waterproofing would work! Woken a little later by the dawn chorus there was time for my morning yoga before taking a stroll along the beach. On return we shared a morning breathing meditation and then Ron cooked omelettes for he and Debra while I feasted on fresh strawberries and Black Zapote, an exotic and rather delicious fruit that when whipped with natural yogurt tasted just like chocolate mousse only without the side effects . . . yum!!!

On the road again and next stop was the beach beneath Thornton Peak where I had been guided to visit as part of my Earthwalk Project. There was no sign of the caves, and recommendations from the local guide and residents against venturing any further into this masculine mountain deterred us from probing further, however a stroll along the beach did reveal to me what may possibly be the source and inspiration of the Aboriginal dot paintings. Every time the tide went out the creative little crabs worked their magic and produced an ever changing mural of interesting and at times quite symmetrical dot paintings. 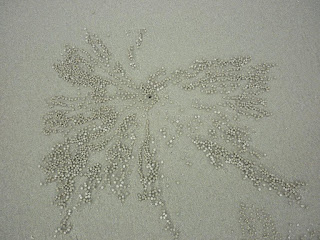 A Sandcrab's interpretation of the Earthwalk Butterfly

We spotted what looked like an old timer of the area sipping his beer and smoking a cigarette while watching the world go by just across the road from the car park. It did not take too long to decide that he would be a likely candidate to ask if there were any other sacred sites in the area and as a result we learnt a little local history and very soon discovered that just up the road were the bouncing stones. An Aboriginal Sacred Site that is no longer sign-posted, due to the number of visitors who, not knowing otherwise, had chosen to take stones home. We were shown a picture of the area and sent on our way with directions that the bouncing stones could easily be found a kliometre or two north after a few bends in the road and just beneath a stand of paper bark gums.

And there we found a highly magnetic area and a whole heap of shiny black stones that when dropped literally bounced off each other. We felt like a couple of kids rediscovering our childhood and the perfect place to share the Earthkeepers Rites. Only before we did and not really knowing why I asked Debra if she would mind giving me a Oneness Blessing. My intuition told me to receive this lying down and as I did I could feel that in addition to the Oneness Blessing I was receiving a transmission from the earth. Debra has also noticed a difference and not a lot was making sense so we chose not to dwell on it and rather be present in the moment and enjoy.

An afternoon drive in search of a suitable place to camp took us to the end of the 2 WD track beyond Cape Tribulation and then back to Noah’s beach were we were fortunate to find a free space to camp for the next couple nights. Time for tea and to set up camp, which simply meant raising a canvas shelter and rolling out our swags, before taking a walk along the beach and introducing Debra to the concept of sand-paintings and their benefits. A very useful tool to take our concerns out of our head, make the most of the opportunity to view them from other perceptual states of awareness and then release them to the universe/earth/elements to work their magic.

Camping in one space for two nights also allowed us a full day to focus on the work at hand and as neither of us wore a watch it was not difficult to allow our day to evolve completely outside of time. We rose with the sun, shared our morning yoga/T5T practice and meditation, ate when we were hungry, walked, worked and went swimming in the sea as and when we were called, and otherwise simply allowed ourselves to be. In so doing I realised that this would be a perfect way in which I could both share and fund my Earthwalk Journey with individuals and/or couples who may be interested with making their holiday vacation a journey with a difference. Perhaps time to think about purchasing a vehicle.

Just after sunset during our Fire Ceremony on the beach where the rainforest meets the reef I shared with Debra the Day Keepers and Wisdom Keepers Rites. A very special moment with the waves lapping on the shore and where the canopy opened to a night sky filled with stars, we were completely alone and at one with our environment. Then as an extra surprise, just before closing as we were holding space for the ancestors of the Daintree we were delighted not only by the incredible response from the land but also from the sea as two etheric whales joined us in the ethers. And within half an hour of closing our ceremony the waves had washed away all evidence of our beautiful day spent completely outside of time.

It was the last day of our journey and with the majority of our work done we were free to explore the upper reaches of the road beneath Thornton Peak before a return trip to the Blue Hole where Debra chose to receive her final two Munay-Ki Rites of Initiation those of the Starkeepers and the Creator. These final two rites anchor one safely to the time after the great change said to occur around 2012. They enable our physical body to evolve into homo luminous, the aging process slows down, our DNA is re-informed while the Creator-light within is awakened bringing forth a sense of stewardship for all creation. www.muany-ki.org 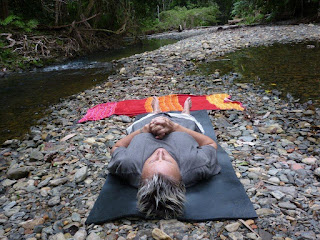 And there was no better way to celebrate a successful journey than a side trip to the infamous Daintree Ice cream Depot and a sighting of not one but three Cassowary beside the road on our journey back toward the Daintree River. 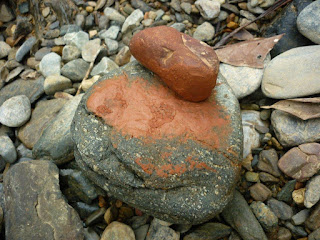 Red Ocre awaiting us at the Blue Hole
Posted by Leanne Edwards at 4:22 PM