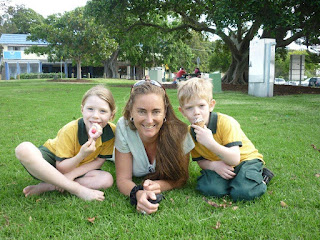 I only had a few days with my sister and family before I received a text message from Shelley, who I met on my Whale Journey, to say that she was on her way down from the Sunshine Coast to Byron and if I wanted a lift she would be more than happy to swing by Wellington Point and pick me up. As long as I was prepared to go with the flow it seemed as though the universe had my travel arrangements under control, once more it was a wonderful opportunity to share a few hours with a like-minded soul and explore our Whale and Kiwi connections . . .

Shelly Emia was born in NZ and immigrated to Australia with her family as a child. Growing up in the Pilbara region of North Western Australia with a predominantly Aboriginal community she has always enjoyed a strong connection to the land and its people. In pursuit of her passion Shelley explored her share of the most well known surfing destinations on our earth before returning to Australia. Here she met Wayne ‘Rabbit’ Bartholomew, a surfing champion in his own right who managed to put Australia’s surfing scene on the world map. Together they had two lovely boys which they share responsibility for while continuing to follow their individual dreams.

For Shelley this has included a recent journey to NZ in search of her Whakapapa (Maori lineage) and stepping up to the stage as a singer and performer. With one of the most amazing voices I have heard for a while I am looking forward to Shelley joining Bunna and the Whaledreamers to perform on stage at the Island Vibe Festival, on Stradbroke Island at the end of October. As we dropped the boys at their Dad’s house for the weekend it was good to meet Rabbit himself a very gentle man with an enormous heart who continues to lead the surfing scene in Australia. 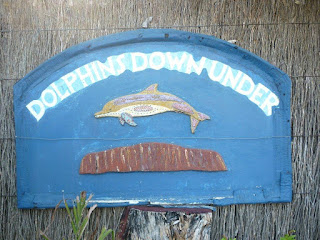 It was pretty late when we arrived at Dolphins Downunder, Arpana and Shamanatara’s space in Suffolk Park just south of Byron Bay. The plan was that in return for taking care of the catering I would receive my food and board and have a base from which to explore Byron and its surrounds. And as luck would have it as Shamanatara had plans to head to Sydney for her sons 21st and Arpana had a workshop to attend in Brisbane it meant that I was off duty for my first weekend. A perfect opportunity to follow up on all of the offers I had received to be shown around town. However for my first evening I was completely content to limit myself to the magic of Dolphins Downunder and my bed in the corner of the garden next to the fairy fountain from where I could see the stars and hear the sound of the surf. 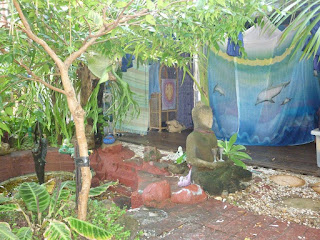 Blue skies and sunshine paved the way each morning and it did not take long to fall into the daily routine of yoga, pranayama, meditation, morning swim, kitchen duties, my admin, dinner preparation followed by afternoon/evening energy healing/bodywork exchanges, family time or outside activities and entertainment. There was also time to experiment with a few toys from Shamanatara’s box of healing tools which included a Zen Chi, the VIBE (Quantum Pulse Machine) and the Scenar, a Russian Device that was designed for Astronauts to promote the body’s ability to heal itself. I felt like a child in a candy store! 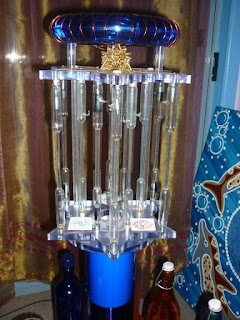 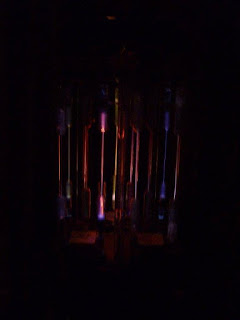 Arpana donned his Dr Peter O’Brian (MD) red sleeveless shirt and woolly hat 4 days a week when he became the barefoot doctor and conformed to regular working hours to practice as the downstairs doctor of Dolphins Downunder. With the assistance of three amazing nurses/earth angels the Dr and his team were kept pretty busy leaving little time to make the final arrangements and preparation for our journey to Island Vibe at the end of the month for the Whaledreamers Gig. And observing the way in which the band shape-shifted each day it was clearly a space in which one had no choice but to practice non-attachment as to who would end up on stage on the night! 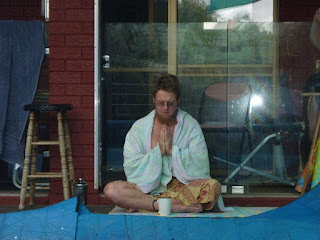 By making the most of opportunities as they came along I enjoyed an introduction to the area and a walk along the coast just south of Suffolk Park with Harry, and was most impressed when the dolphins came to entertain us beneath the cliff known as Woolly Mammoth. Another day in my enthusiasm to explore I hitched a lift with Arpana up to the Crystal Castle and spent a few hours soaking up the higher vibrational energy as I wandered through the grounds, experienced a labyrinth for the first and second time and watched the documentary of the Crystal Caves of Mexico, another enticing destination that has been on my map for the last couple years since I became aware of its existence. 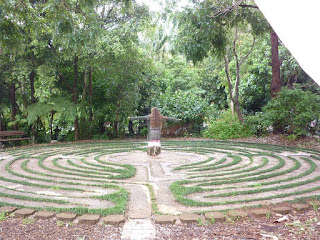 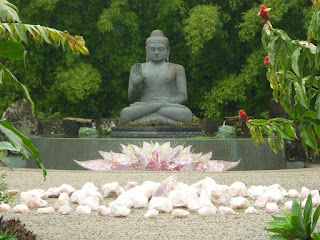 As luck or divine management would have it Tarshito lived in the community just next door to the Crystal Castle and on Wednesday evenings he and Eltara, one of Dr Didge’s earth angels, held a chanting circle in Byron so I hitched a lift back with him and joined their circle for an evening of song and music. And as luck would have it Chinta, our skipper and percussion man (www.rhythmkonnections.com.au) from the Whale Journey who was also residing at Dolphins Downunder just so happened to have the night off so showed up with his Djembe and was there to give me a lift home afterwards.

The following Friday evening was a joint birthday celebration for Arpana and I along with a reunion of our group from this year’s Whale Journey. A brilliant evening beneath our Southern Stars, both the plunge pool and the spa were filled with beautiful people as the slide show played across the outdoor screen and Whalesong and Whalestories filled the minds and bodies of all present as we were transported back to our magical week on Hervey Bay.

Swimming out past the surf each morning kept me fit while also bringing many gifts including a couple playful dolphins one day and humpback whales a little farther out the following. I also discovered that it was the best place to ask for help when one morning in frustration over my right hip I shouted to the universe as loud as I could for help from a good body worker. What happened next both surprised and amazed me . . .

Almost a week previous on recommendation from Arpana I had phoned Egbert to make an appointment to get some help with my ongoing alignment issue yet for some reason had not heard back. Hence when Arpana informed me that he had simply sent an sms to Egbert and received an appointment for the following day I was wondering if you had to be Arpana Geeta to get service in Byron! Just to check I figured that I would phone Egbert from Arpana’s phone and send an sms from mine and see if I could get his attention. Now what was so bizarre was that there was a knock at the door about 2 hours later and it was Egbert who, without having rcvd either my phone call or sms had been called to show up at Dolphins Downunder . . .

My call across the ocean waves that morning had obviously been heard and not only did I have an appointment with one of Byron’s best body workers but it ended up being a door to door service with an afternoon swim at one of the southern beaches thrown in at no extra charge. Once more we made a date to share an exchange later the following week. And then when I returned to Dolphins Downunder Jason, a Kahuna Massage Therapist who also came highly recommended, was just packing up after session with both Shamanatara and Arpana and after comparing notes and services was quite happy to make a date for an exchange on the following Monday afternoon. 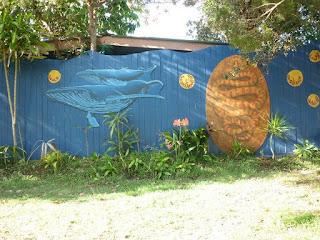 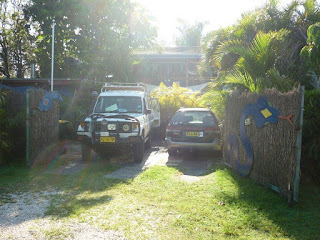 I still had a week to go in Byron and it was already booked . . . Killen Falls and the T-Tree lakes with Zakiaran on Sunday, exchange with Jason on Monday, Guy had invited me to visit the Rainbow Temple on Tuesday afternoon, Sounding Healing Tuesday evening at the Lotus Temple, Wednesday exchange with Egbert and Thursday to prepare food and pack for our departure to Stradbroke Island and the Island Vibe Festival on Friday!
Posted by Leanne Edwards at 7:12 PM